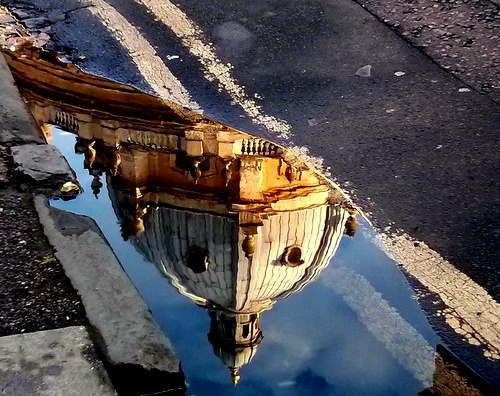 I like how this picture happened.  Two days ago, near the time that I was thinking of heading home from work it started to rain.  I’m not too worried about rain here, because after all, England is famous for it.  Just as I was about to slap on my waterproofs I noticed that the rain had stopped, and the clouds were making way for some sunshine.  After unlocking my bike I followed my usual route home and stopped at a crosswalk.  It was here that I noticed a great reflection of one of Oxford’s many old buildings, and made the decision to change direction and head toward Radcliffe Camera instead of home.  I was hoping to find a puddle large enough and at the right angle to get the famous building plus it’s reflection in one photo.  No luck on that part, but I did take this one and some others around town.  I even had a couple of people stop to approve of my idea and take similar pictures.